Emmy-award winning actor Jacob Young made his casino debut as the opening act for “Dynasty” diva Joan Collins in her one-woman show. And, come this Sunday and Monday, March 26-27, Jacob will return to the Las Vegas Strip when he presents his new country music show alongside a small group of talented musicians, inside the Laugh Factory at the New Tropicana Resort.  At the time of his first Strip performance, Jacob was playing “JR” Chandler on the classic television show “All My Children.”  Their show marked the first-time Alexis and JR were appearing on the same stage. 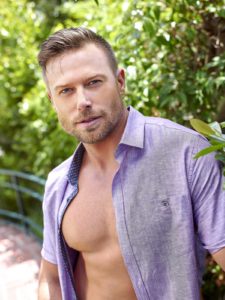 Currently Jacob can be seen as the well-dressed business man Rick Forrester on CBS’s “The Bold and the Beautiful.”  Ironically in real life, Jacob is a laid-back cowboy, and an amazing country music singer.  The Bold and Beautiful fans just cannot get enough of Jacob’s amazing singing voice and for good reason, he has some serious skills.

Jacob was presented with the Golden Nymph Award by Prince Albert at the Monte Carlo Television Festival in recognition of “The Bold and the Beautiful” being the most watched soap opera in the world for over ten consecutive years.

The actor began his daytime career playing “B&B’s Rick back in 1997, but over the years he also played Lucky Spencer on General Hospital, a role for which we won a Daytime Emmy Award,

and J.R. Chandler on “All My Children” a role which also crossed over to “One Life to Live.”  In total, Jacob has been nominated for a total of six Emmy Awards.

Jacob’s television career began at the young age of seventeen.  On Broadway, he starred as Lumiere in “Disney’s Beauty and the Beast, stopping the show every night with his rendition of “Be Our Guest.”  Jacob followed his successful self-titled CD in 2001 by returning to his country roots. Not one to shy away from opportunities, Jacob has also flown with the USAF Thunderbirds.

VIP tickets to his shows include a “meet and greet” opportunity. Show Dates and Times are:

THIS AND THAT QUICKLY:

John Force’s Funny Car victory Sunday in the NHRA Gatornationals in Gainesville, Fla., was memorable for many reasons, including yet another milestone over the team’s 40-year existence in the NHRA Mello Yello Drag Racing Series. After winning all four rounds, and coupled with Robert Hight’s first-round victory, the team achieved the 2,500-round victory threshold for Funny Cars. Force’s final-round win over rookie Jonnie Lindberg sealed the deal.

JFR’s first round victory was June 1, 1979, when Force defeated Tom McEwen at the Cajun Nationals in Baton Rouge, La. Force himself has accounted for just over half of those 2,500 Funny Car round victories, as he now stands at 1,269, with six round wins this season. He defeated Del Worsham, Jack Beckman, and Tommy Johnson Jr. before beating Lindberg on Sunday. Even more impressive is that JFR’s 2,500 NHRA Funny Car round wins’ account for more than 20 percent of wins all-time in the class. 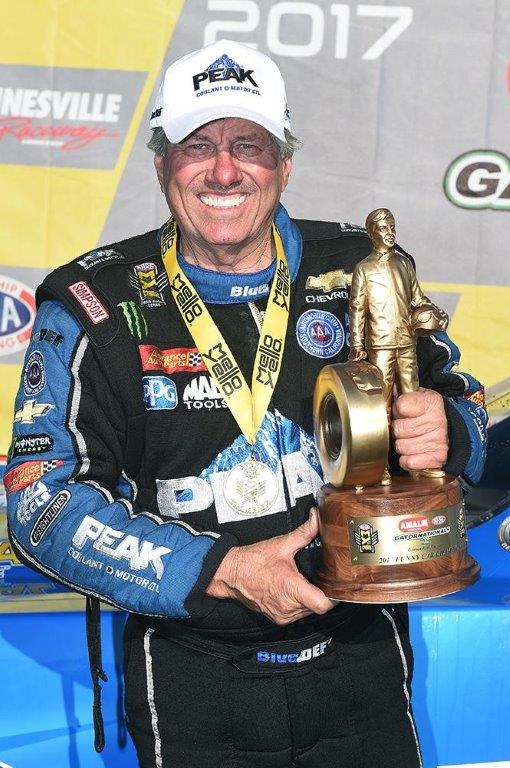 Force will now take on The Strip at Las Vegas Motor Speedway, the fourth round of the NHRA Mello Yello Drag Racing Series.  The NHRA Nationals kicks off on Friday through Sunday, Mar. 31-April 2. John Force Racing has won five races at the spring race in Las Vegas, most recently with John running the table in 2015.

“It was the reign of terror that started it all, with Austin Coil, Bernie Fedderly and John Medlen,” Force said. “It was really about a group of guys – it wasn’t about me. I just wrote the checks, but I got to drive one of the baddest hot rods on the planet. We won just about everything.

“But those days are gone now. John Force wants to stay in the game, and now we’ve got Robert Hight, my daughter Courtney, young Austin Prock is coming,” he continued. “I’m really excited about this. We put the band back together. Mick Jagger of the Rolling Stones said life’s a drag, but today, life’s not a drag – it’s a drag race, and we won.” 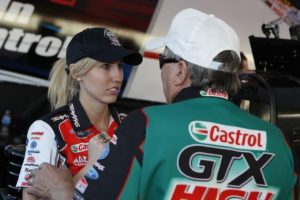 Hight added to his total Sunday, besting Bob Tasca III in the first round with career-bests in time and speed, and has two round wins this season. Courtney Force won her first three rounds of the season at Pomona, making it to the final round.

“It’s amazing, but what’s really amazing is when you look at who has most of those wins,” Hight said. “John Force’s records – he’s so far out in front of everybody else – it’s not even achievable. With the competition level and everything else there is today, these records we keep getting will never, ever be broken. I was lucky enough to get the 200th victory for John Force Racing at Topeka (2011), and that was pretty exciting."

To do it at Gainesville, Hight added, was special. In the 1990s, for example, Force participated in 37 rounds out of a possible 40, and won 33 of those 40 rounds. He just kept winning ... and winning ... and winning. “He’s had good luck at Gainesville,” Robert said. “But I take away from this that all three of our Funny Cars are running good, and we’re not searching for faster cars but right where we want to be. We just need to get a little consistency. I’m just happy to be a little part of those 2,500 round wins. We have three good cars now, and we’re going to get a lot more wins.”

The milestone is more than just a number. It represents tireless efforts by drivers, crew chiefs, team members, fabricators, shop workers, and office staff who have worked with Force since the 1970s.

“If you look at the Tony Pedregons that drove for me, the Eric Medlens, the Gary Denshams, Robert Hight, my girls – if you go down that list, they were all part of that. It wasn’t just about me," Force said. "I’ve done well in the sport, because I’ve lived it and loved it. I give 110 percent to my sponsors, never 100 percent. We overdeliver, you have to. With the cast of characters, we have, we’re going to keep hitting them with all we’ve got!”

Vegas Indoor Skydiving, the first indoor skydiving facility to open its doors in the United States, is continuing its 35th Anniversary Celebration with the second annual Tunnel Jam flight competition, pitting the city’s most talented “bodyflyers,” against one another, for the chance to win cash prizes and claim the prestigious title of “Tunnel Jam Champ.”

“We’re all excited and honored to be able to feed hungry families by doing what we love in a city that we cherish so much,” said Dave McMahan, Business Development at Vegas Indoor Skydiving.  “From the overwhelming success of last year’s Tunnel Jam, we knew we had to go even bigger this year and that’s just what we’re doing!”

“The thrill of indoor skydiving is a unique way to draw attention to the issue of hunger, and we’re very grateful for the 750 meals that the 2016 Tunnel Jam made possible for those in need in our community,” said Brian Burton, CEO, and president of Three Square Food Bank. “We are very fortunate to benefit from the event again this year, and we can’t thank the team at Vegas Indoor Skydiving enough for what they’re doing to improve the lives of our fellow Southern Nevadans.”

2017 Tunnel Jam Invitational will be held Saturday, March 25, 2017 at the Vegas Indoor Skydiving parking lot at 200 Convention Center Drive. The day-long festivities, including live music, food, raffle prizes and the chance to purchase anniversary flight specials for $35 per person, will begin at noon. Entry to the 2017 Tunnel Jam Invitational is free. To receive a raffle ticket, guests are asked to donate one bag of non-perishable food (at least two cans) at the door, which will go directly to Three Square Food Bank, to help families in need. All guests are invited to view the competition, one-of-a-kind body flight demonstrations and the award reception, as well as food and beverages. The competition will begin at 5 p.m. inside the 22-foot-tall flight chamber, and will feature two divisions, Intermediate and Pro. Fifteen “bodyflyers,” from the Vegas Indoor Skydiving staff and beyond, will compete for more than $6,000 in cash and prizes. Each contestant in the Amateur and Pro Divisions will take part in a “Best Routine” competition, where their minute-long routine will be judged on a 30-point system, with marks for style, difficulty, and execution. In addition, the Pro Division will take part in a “Best Trick” competition. The Tunnel Jam 2017 celebrity judge panel will include BMX pro and reality television star Ricardo Laguna, legendary flight instructors Ray Kubiak, Jimmy Redmond, and Indoor Skydiving Champion Mike Silva.

Steve March-Torme will perform his special blend of music, once again, at the Smith Center Friday and Saturday, April 14-15. The show is titled “Touchstones”: Legacy of Song and will be staged in the famous Cabaret Jazz room. Steve March-Torme delivers a fresh dynamic take on enduring songs from multiple eras.  The son of Mel Torme, Steve has developed his own captivating style that is on full display throughout a thrilling evening of music by Ray Charles, Cole Porter, John Lennon, Paul McCartney, Stevie Wonder, Mel Torme, and many more.  Backed by his crackerjack quartet, Steve has electrified audiences in intimate jazz clubs and performing arts centers worldwide. Tickets are $35 - $55. 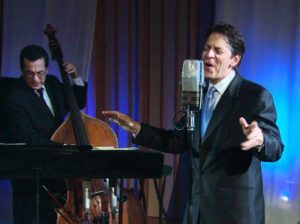 Well, gang, that’s about it for this week. I’m outa here!