‘In Composition’ at Judy Bayley Theatre was one of UNLV’s Dance Department’s best professional-level performances.

The six pieces were choreographed by members of the department’s faculty whose dedication, talent and credentials contribute so much to the students’ impressive progress.

The twenty dancers in ‘Composition’ distinguished themselves in balletic works, frequently on pointe, as well as in modern, contemporary and even tap, and attained the same high artistic level as the choreography and music.

With a few recorded exceptions, the musical accompaniment was original compositions  performed live on stage. 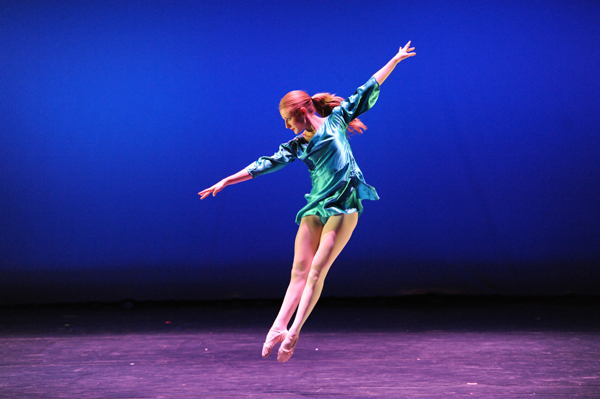 Kelepecz is an accomplished dancer/choreographer who has been a member of the University’s dance faculty for 35 years.  Vega is Associate Professor of Composition and Theory at UNLV and his compositions are performed in concert halls worldwide.

The choreography was an ideal visual realization of the lyricism and vigor that pervaded the music.  The score was played with unique sensitivity by a quintet of strings and piano.

A pas de six for three couples, coached by partnering expert Sean Cronin, might qualify as an especially bright segment in an already stellar creation. 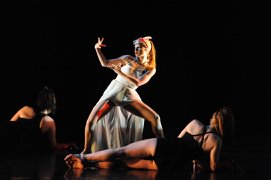 The earth tones of costumes and lighting by Shaquida Vergo and Becky Heisler McCarthy, respectively, were perfect as was the nuanced difference in illumination between musicians and dancers.

This ballet could well be the choreographer’s chef-d’oeuvre. 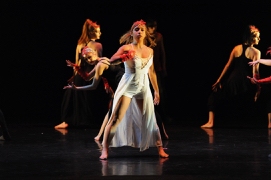 Kavouras enjoys an eclectic career as dancer, choreographer and visual artist and since 1994 has chaired the University’s dance department.  Under his aegis, the department has gained a reputation as one of the country’s finest academic sources for dance education.

Professor Mehocic is the dance department’s esteemed Music Director and Composer-in-Residence.  Her music is widely performed in the USA, Europe, China and Japan and is available on Parma Recordings.

The music was in five sections and the scores for each were placed on separate music stands arranged in a semi-circle.  Rather than turning pages Uscher would move from one stand to the next.  The result, visually and musically together with lighting by Elizabeth Kline made a delightful set up.

Another Mehocic composition ‘Picasso’s Flight for String Quartet’ – Picasso is her parrot’s name - was choreographer Victoria Baltimore-Dale’s inspiration for ‘Flight of the African Grey’ another rare parrot.

Depicted in the exciting, sometimes fierce music and dance were the birds’ struggles to fulfil their dreams of freedom and an elevated life – not unlike human aspirations.

The costumes of white and yellow gowns and red tunics were effective but uncredited. 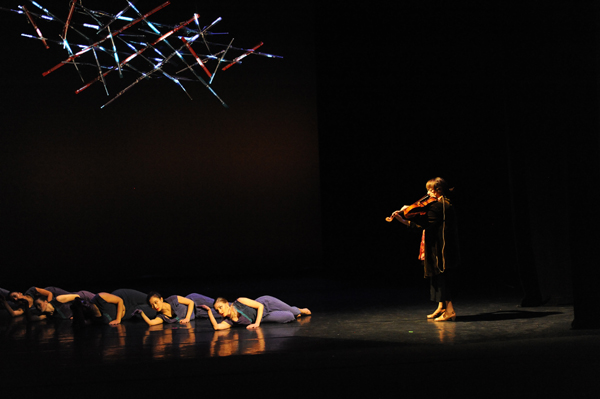 Dale, performer, teacher, choreographer, author and specialist in African American dance, is an active member of the Board of Directors of the International Association of Blacks in Dance.

Associate Professor Cathy Allen, a former professional dancer whose works have been performed internationally, choreographed ‘Falling From the Curve’ to a compelling score by Charles Halka Visiting Lecturer of Composition and Theory.

The dance style was modern and possessed the inventive moves expected from an artist of Allen’s stature.

Richard Havey trained with jazz legend Gus Giordano and has danced and choreographed in Europe and America.  He set ‘Chase the Stars,’ a multi-style piece, to music composed by Jennifer Bellor another Visiting Lecturer of Composition and Theory.

The work’s innovation was the inclusion of Bellor as solo singer who while she performed, moved gracefully amidst the ensemble.

Her soprano voice sounded opera trained, but I was unable to discern if she was singing in a language or perhaps making original, purely vocal sounds.

Twelve young ladies wearing long black dresses danced and posed on a darkened stage creating an effectively mysterious, but sometimes somber atmosphere that left me in the dark, too.

It got off to a good start with a solo performed by Cosette Richardson who, in an emerald green tunic, seemed to fly about the stage like a Peter Pan without wires.  She recently reprised the role for BAX in New York in a shared concert of works by Colbert and her daughter, Nicole.

Professor Colbert joined UNLV’s dance faculty in 1991 and now, after 27 years, is retiring.

She is a graduate of Julliard School of Dance in NYC and trained in classical ballet with American Ballet Theatre and Royal Danish Ballet.  Her studies of modern dance were with Martha Graham, Jose Limon, Merce Cunningham and other distinguished figures.

In the last decade alone she has choreographed more than 20 dances some of which have been performed as far afield as Russia and Australia as well as the USA.  Since 1998 she has presented an annual dance program in Copenhagen, Denmark.

A retirement party is scheduled for April 2nd at Alta Ham Fine Arts Building on the UNLV campus at 2:30 pm.

I suspect that retirement won’t stop this creative and energetic Lady from continuing to create more dances.