Sin City Opera’s recital at Summerlin Library Performing Arts Center was appropriately entitled Opera at the Movies and was a huge success.

What was innovative was the program’s repertoire which consisted of arias and duets used in eleven Hollywood films between 1935 and 2011.  As the singers performed, brief excerpts from the related film were shown on a large overhead screen.

Skip Gallo, the troupe’s artistic director, stated in the program notes that the cast of four ladies and one man were some of SCO’s “…most magical voices…” and magical they were, be they soprano, mezzo, coloratura or tenor. 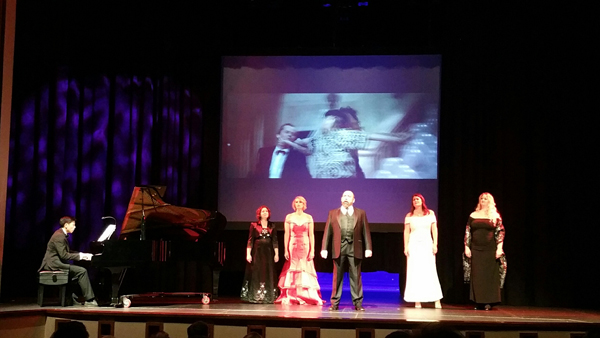 Powerful tenor Craig Alan Thomas was indefatigable; he sang eight of the 20 selections, including Nessun dorma and, of course, Leoncavallo’s Vesti la giubba from Pagliacci.  He has that dark, ringing metallic quality associated with the best dramatic tenors.

All the artists exhibited relaxed stage presence and the ability to suggest with face, gesture and movement the mood and meaning behind what they were singing.

The performance was visually pleasing, too.  The ladies were lovely in long formal gowns, and Mr. Thomas elegant in his three piece full dress gentleman’s suit.

SCO’s music director and conductor, Maestro Dean Balan, studied with a special faculty group from the Metropolitan Opera.  His accompaniment on solo piano for ‘Movies’ was   superb.  He also serves as company pianist for Nevada Ballet Theatre and UNLV Ballet as well as numerous Las Vegas Strip productions.

In some instances I personally found a few of the film clips unsuited to the arias and a distraction from the singers.  However, I was probably a minority of one in an audience clearly delighted by it all.

April 20-29 SCO presents its updated version of Pagliacci, sung in English, at Winchester Cultural Center.  Some of the same artists that appeared in Opera at the Movies will be performing.  Times and tickets are available on line at SinCityOpera.com.

Speaking of Winchester, another exciting upcoming event is Tango Malambo March 9th and 10th.  It is produced and directed by Maestro Oscar Carrescia and is described as a ‘full scale tango extravaganza.’

Featured will be Argentinian artists including singer Damian Rivero, bandoneon player Javier Sanchez and dance duo Daniela Rosal and Claudio Otero.  They will be joined by local Las Vegas musicians.  Time and ticket info is available at 702-455-7340.